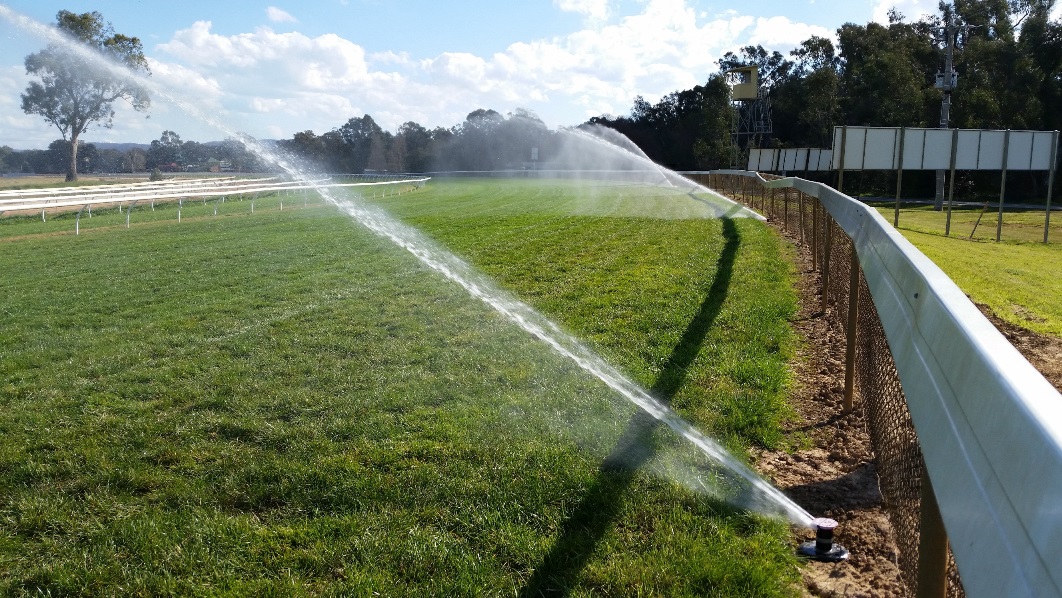 The Wangaratta Turf Club is located in the bustling regional centre of Wangaratta in North East Victoria. Located just over 2 hours from Melbourne, the race course is a major training centre for horses in the region, and boasts a great events calendar including three major race meetings each season.

Racing at North Wangaratta began in 1845, and 10 years after its start moved to its present location. The course is busy with an average of 100 horses training at the facility each morning. The most famous horse to have raced at the course was three-time consecutive Melbourne Cup winner Makybe Diva, who began her amazing career with wins at Wangaratta.

The club has recently undergone a major renovation of the race track and its irrigation system, as well as upgrades to the sand and grass training tracks.
Reconstruction of the main course started late 2014. The old surface was sprayed and mowed down, and the top 40mm of the surface was removed (including 90% of the seed bed).

The surface was then laser levelled and over 3,000 cubic metres of sand added to the profile of the track to improve drainage and growing conditions. The next step was lineplanting Kikuyu in January 2015.
Greg Brown, track manager at Wangaratta Turf Club said: “We needed to upgrade the old irrigation system as it was leaking at valve boxes and we had very uneven cover. Different size heads were used across the course and the training track only had irrigation on the outside perimeter.
“In total we undertook seven kilometers of trenching to make three ring mains and we had to cross the track in five different locations.

“We chose Toro® Flex800™ sprinklers with valve-in-head decoders to irrigate the main track and have 400 installed. We really like the ‘TruJectory™ adjustment’ on the sprinklers, the fact that you can change the degree that the sprinkler heads project water at, this allows us to have an extra rail movement.”

Chris Williams, regional manager for Toro Irrigation adds: “These trajectory adjustments can be made from the top of the sprinkler to allow for fine-tuning from 7° to 30° in 1° increments. This adjustment provides precise head-to-head coverage and improved nozzle performance, and allows for compensation in conditions such as wind and low-hanging obstructions.”

“The Flex800 sprinklers’ performance data suited the spacing and design of the new track very well and the fact that the decoder was housed against the body of the sprinkler is another key feature the team at Wangaratta loved,” says Williams.

Toro® T5 sprinklers with low angle nozzles were installed along the narrow training track with a spacing of eight meters.

“One of the great features of the Lynx software is its flow management capability. It allows the user to set the run times for each sprinkler head individually and the software then calculates which heads it can turn on in what part of the system. The system automatically runs as many sprinklers as possible without overloading the system hydraulics,” explains Williams.

“This effectively means you can do more watering in a shorter period of time and it will also give the user more flexibility with watering and control of wet and dry areas.”

Brown adds: “The Lynx system is very easy to use and, as it is compatible with mobile phones and iPads, the ability to watch, react and modify the irrigation system remotely is a huge plus.”

Toro® Turf Guard™ wireless soil sensors were installed in four locations on the course: two on the home bend and two at the finish. The sensors measure soil temperature, moisture and salinity at two different levels. Data from the sensors enables Greg Brown to see what is happening in the ground and can ultimately help him save water.

For example, fertilising ‘wash in’ can be monitored to make sure it is washed in to where it is needed and not washed all the way through the profile. Temperature monitoring can be used for pre-emergent treatments, as temperature plays a big part in when certain weeds will germinate.

Chris Williams: “Think Water Melbourne did an absolutely outstanding job in installing the irrigation system. They made the whole installation process run fast, smooth and completely pain free for the club. Greg Brown and his team were also great to work with.”

“We chose Toro because we liked their back up and support. They have been a pleasure to deal with. The sales team are always ready to help and the staff at NSN are only a phone call away if you want some advice or have a question about the computer system.

“We reconstructed the main race track at Christmas time 2014 and line planted Kikuyu late January 2015. We had to put three millimetres of irrigation on three times a day and had a full cover of grass by March. We put that down to the excellent irrigation system,” concludes Brown.