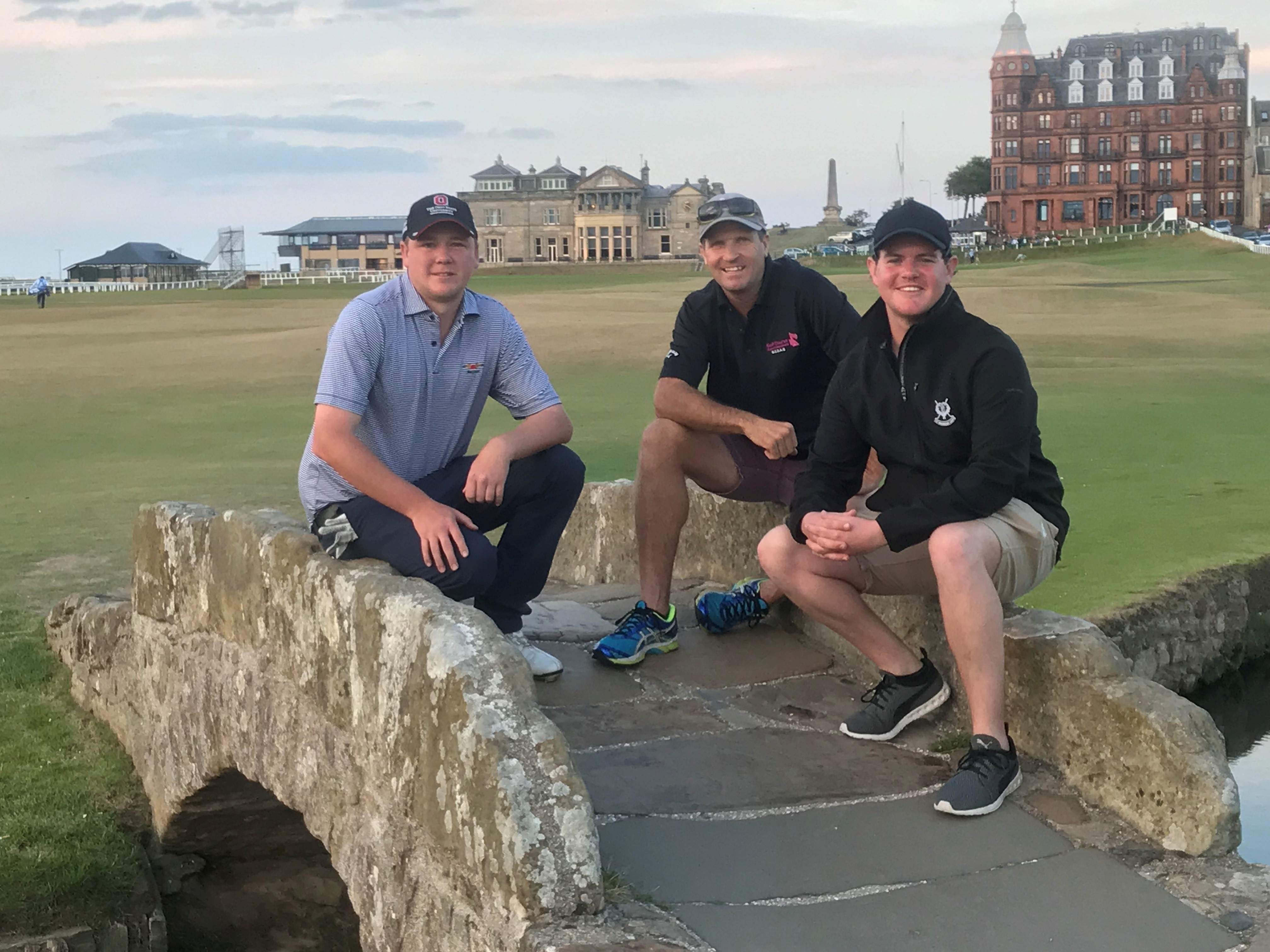 “Hard work and dedication pays off and can take you to great places.” (Liam Scott)
“I felt a great deal of achievement. This has topped my career in the trade so far.” (Stuart Campbell)
“An amazing feeling. I felt like I was being rewarded, and what a reward it was.“ (David Hurst)

These words describe how the three assistant superintendents, who won Toro’s “Assistant Superintendent St Andrews Internship” competition, felt upon hearing they had been selected.

Liam Scott of Keysborough Golf Club, Stuart Campbell of Maroochy River Golf Club and David Hurst of Cromer Golf Club have recently returned to Australia after completing their once in a lifetime experience.

The three travelled to St Andrews Links at the start of July and worked at the Junior and Senior Open. They also visited the Open Championship at Carnoustie Golf Links, got a chance to shadow the course managers, and spent time with the learning and development officer.

They were part of the grounds crew for the Junior Open held at the Eden Course. This event is aimed at junior players (ages 16 and under) and held over 54 holes. In the week leading up to the event, the course was the driest it had been in many years due to above average summer temperatures. This led to reduced cutting regimes and allowed the crew to focus on the finer details of course presentation.

The Senior British Open was held on The Old Course for the first time in the Championship’s history. “Our time on the Old Course was spent during the preparation for the lead up to the tournament, with tasks including hand mowing greens, changing holes for the practice rounds, and levelling bunkers and some last-minute touch-ups. The Old Course is always in a condition that is so close to perfect that it only takes the smallest of tweaks to have it prepared for any major championship,” said Campbell.

The rest of the interns’ time was spread out over the other courses that make up the Links: The Castle Course, Jubilee Course, New Course, Strathyrum Course and Balgove Course.

The three assistants agree that working at St Andrews was amazing. The courses are well staffed with personnel being able to give certain tasks their undivided attention.

“The tournament organization is fantastic,” said Hurst: ”The pre-planning that goes into major events is meticulous, covering all jobs and tasks for the day’s play. Changing weather conditions were the only reason for changes to the daily work schedule. Both tournaments ran very smoothly and there was only one disruption due to a fog delay.”

The three consider themselves lucky to have been working with great crew members and in sheds filled with the very latest Toro equipment. Many friendships and professional relationships have been formed, not only with the other interns but also with some of the St Andrews and seasonal staff. As Scott put it: “I loved every moment of my trip, good bunch of blokes at all courses.”

Something that caught the assistant superintendents’ attention immediately upon arrival is that the St Andrews courses are kept very natural looking and dry, which is different to Australian customs.

Campbell admitted that when they first arrived at St Andrews, initial thoughts were to 'put some water on the place' as it was so dry. However, as the time went by they really developed an appreciation for the dry look and the surface it actually produced.

“This is not something that we can replicate in Australia as climate conditions here would mean we have dead turf and cracks in the fairways,” he said. “But I think we sometimes tend to overthink things and have higher inputs into growing grass compared to Scotland. A lot can be said for the KISS method (Keep It Simple Stupid), this is something that I am trying to think more about now when problem solving at work.”

The differences in climate and growing conditions is also one the biggest things Hurst and Scott will take away from their time at St Andrews Links. “I did really enjoy seeing how far they are willing to push the turf in regards to moisture percentages,” said Hurst.

“The climate and conditions of Scotland make turf management different from what we have in Australia. There is (normally) little heat and disease pressure, and stress with the purity of the turf playing surfaces. The links theory of basically cutting and maintaining whatever grows on the site definitely comes into play at St Andrews,” said Scott.

The highlight of the trip for all three assistants was being able to actually work at St Andrews. As Hurst said: “It’s The Home of Golf and you can feel that whilst you are there. The Old Course is so unique and has a history like no other. You know that you are in a very special place when you walk the fairways.”.

Scott completely agrees and said that getting to see and work on the most famous golf property in the world, and seeing, feeling, learning and understanding the history of golf was nothing short of amazing.

All three assistants would like to thank Toro Australia and St Andrews for making this internship possible. Special thanks go to St Andrews staff headed by Gordon Moir, whose organisation, advice and acceptance was invaluable.

“To be actively involved in the Senior and Junior Opens was nothing short of sensational and gave great insight into the expectations and challenges which we will all face in our jobs in the future,” said Campbell.

Hurst: “I can't thank Toro enough. This experience has given me a passion to take back to my club to become a great team leader and above all future superintendent.”

Final words? Scott said: “Definitely recommend to all assistants to put an application in for the next trip!”