The next generation irrigation controller: The Toro EVOLUTION® Controller 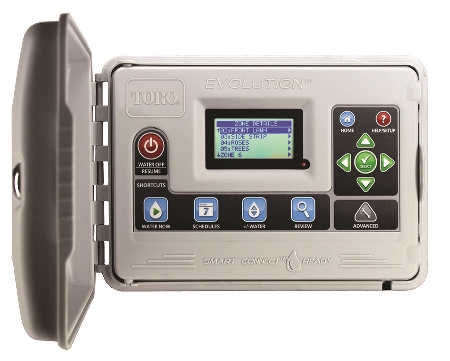 The Toro® EVOLUTION® irrigation controller is a first-of-its-kind, menu-based controller that incorporates an easy-to-understand digital interface and pushes technological boundaries regarding simple operation and expandability.

Back in 2009, Toro asked landscape contractors and homeowners in the US and around the world what they liked - and didn’t like - about their irrigation controllers. Whilst there were many different needs, there was a common theme that stood out; making a more modern intuitive interface.

“One of our primary objectives with the EVOLUTION controller was to give the contractor everything they would ever need to sell, without sacrificing the simplicity needed for the homeowner,” said David Richardson, Irrigation Product Manager for Toro Australia.

“Research told us that nearly all homeowners had a tough time operating and understanding complicated controls. With a few shortcut menu options on the EVOLUTION controller, homeowners can do all the basic functions they would ever need to do and leave the advanced functions for the contractor.”

By pressing the “Advanced” button on the controller’s touch screen, landscape contractors will have access to the full power of the EVOLUTION controller including the ability to set up multiple irrigation and auxiliary schedules and create custom grow-in schedules. Operations that may otherwise overwhelm a homeowner.

Furthermore, easy to use software allows the user to program everything at a computer. Simply use a standard USB drive to transfer programming to one or more controllers in a matter of seconds. The USB drive also provides controller logging functionality to save an operation log for diagnostic purposes. Software can be downloaded for free at www.toroevolution.com

“We believe the EVOLUTION controller will have quick adoption because it’s so different from what’s on the irrigation market today, yet so similar to common devices that customers use regularly, like their MP3 players or mobile phones,” added David.

“It’s actually fun to program because it’s so intuitive.”