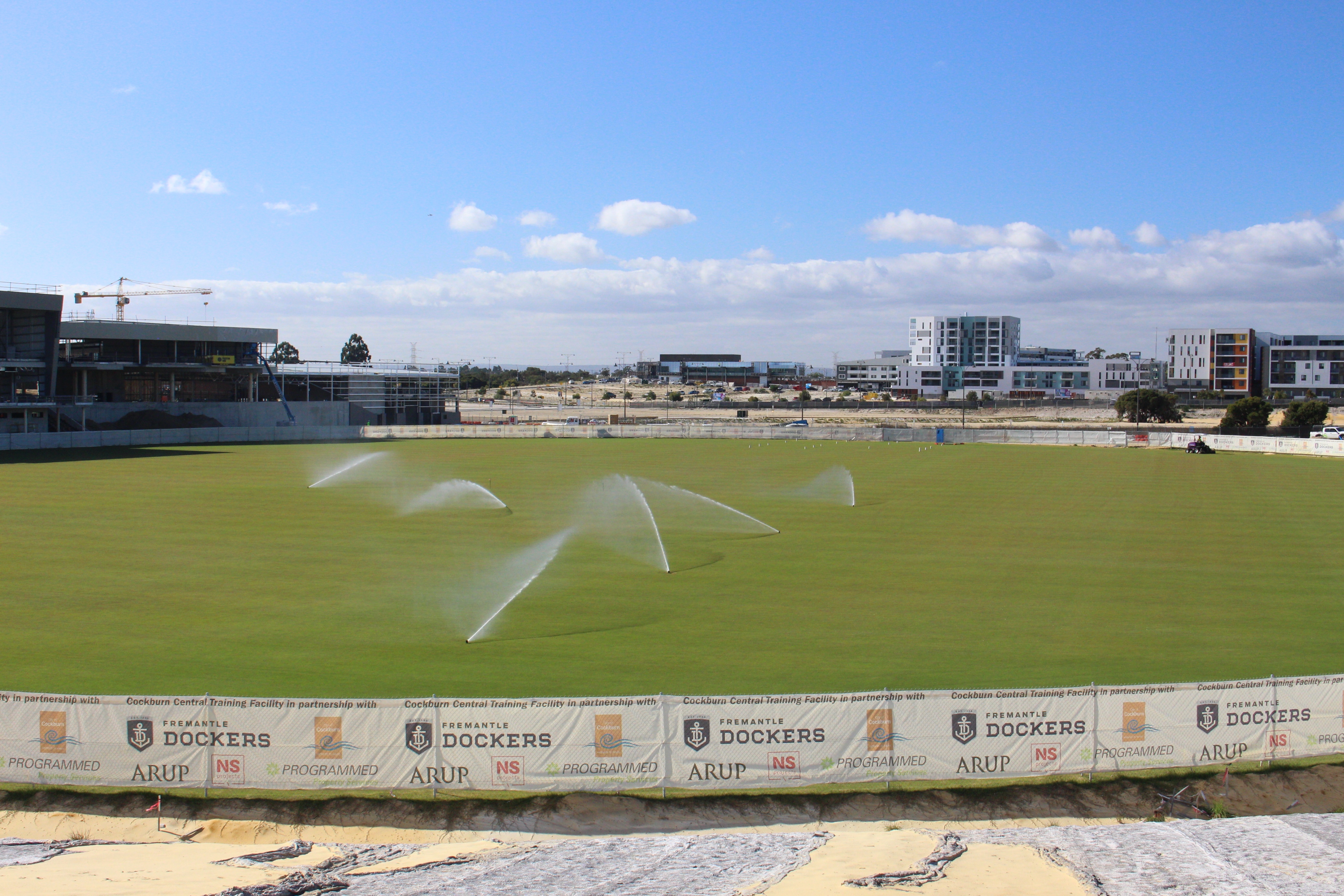 A new standard for best practice in the very competitive AFL will be set when the $112 million Fremantle Dockers training, administration and recreational centre development opens in Cockburn Central West in Western Australia.

Programmed Property Services, a leading provider of staffing, maintenance and facility management services, is managing the construction of the new playing surface.

Grounds division state manager Nick Clayton said Fremantle will have one of the best training grounds in the competition: “Football ovals in Australia are different in size. As a club, you may be used to training on a particular size ground, but your game may be played on a different size oval. The new Dockers training oval can replicate up to 13 different AFL grounds across the competition. We can easily re-create the coming weekend’s pitch dimensions through the use of GPS-controlled line marking equipment, in conjunction with moveable goal posts. This should give the Dockers a real competitive edge.”

Toro irrigation and equipment products are in use at the new facility, which will officially open in early 2017.

Toro’s Western Australian Irrigation Territory Manager, Gareth Jones, said: “The irrigation system is designed to make grounds maintenance efficient, reduce risks and potential damage to the field of play, and uses water only when and where needed. All irrigation is automatically controlled in line with the weather conditions with data from a solar-powered weather station.”

The market-leading Toro® Lynx® central control system was chosen to control the entire irrigation system.
The unique flow management capability of the system allows the grounds crew at Fremantle Dockers Stadium to set the run times for each irrigation station individually and the software then calculates which heads to turn on in a specific part of the system. Lynx will automatically run as many sprinklers as possible without overloading the system hydraulics. This effectively means you can do more watering in a shorter period of time, which gives the Dockers team more flexibility with watering and control of the zones with differing watering requirements, according to Jones.

Clayton was impressed with the Lynx system’s physical on screen display: “You can see exactly which sprinklers are actually on. This is a good feature in conjunction with our on-site camera. I also like the fact you can drag over an area with your mouse on the screen and the system will automatically add those sprinklers to a program you’re creating,” said Clayton.

Other benefits of the Toro Lynx system, according to Clayton, are its ease of use and compatibility with mobile phones and tablets, as well as the included support from Toro’s National Support Network (NSN)*.

Six Toro® Turf Guard® soil moisture sensors, which were installed in key locations underneath the playing surface, will monitor and log soil moisture, temperature and salinity.

Clayton likes the fact that Turf Guard is wireless: “This is of huge benefit to us as we don’t have to worry so much about future turf renovations and damaging wires. The two prong design of Turf Guard is great – this gives us sensor reporting at two levels so we can see a correlation between the playing surface and the subsoil.”

Jones added: “Turf Guard is the ultimate tool to optimize turf health and performance, by putting information on a range of soil and turf conditions at the user’s fingertips. Knowing exactly when heat stress starts to impact the turf, or when to water and how much water to apply to assist in alleviating disease, weed and pest activity is of the utmost importance to maintaining top playing conditions and vigorous healthy turf.”

The stadium grounds are irrigated by Toro® TS90 Series Sprinklers, chosen for their superior uniformity and available nozzle options. These sprinklers come with TruJectory™ trajectory adjustment, giving operators the ability to drop or raise nozzle stream height from 7°-30° to assist with wind and negate overspray.

A Toro® Workman® MDX vehicle and Toro® Reelmaster® 5510 mower were supplied through T-Quip Turf Care equipment specialists in Perth. Clayton said: “We have a great relationship with T-Quip, as they have loaned us machines during the construction phase and made sure our new equipment was delivered on time.”

The new equipment will form part of the maintenance package of the grounds.