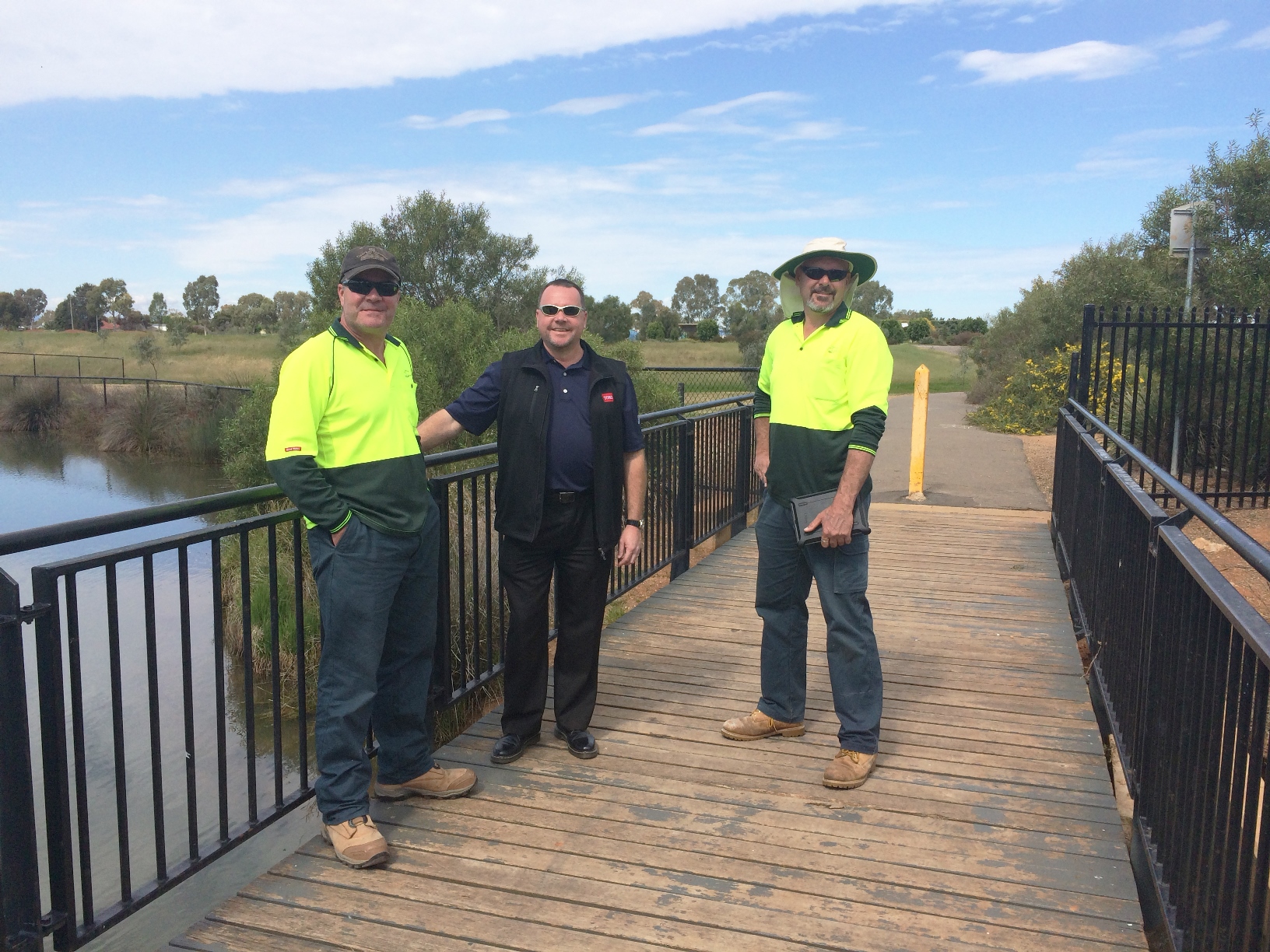 “Waterproofing Playford” (stage 2) proceeded the stage 1 project and essentially bolstered the previous stormwater harvesting and reuse program. Combined stage 1 and 2 aim to capture and recycle up to 1,500 megalitres of stormwater each year.

Stormwater is collected and treated during wetter months in the cities’ wetlands. Through the use of sophisticated ASR technology, treated stormwater is injected into the aquifer and used in drier months to irrigate parks and open space that would otherwise rely solely on drinking quality mains water. A total of four community bores were established and a further 18 kilometres of purple pipe was installed across Playford as part of the stage 2 project.

At the same time that the Waterproofing Playford projects were being developed and implemented, the City’s Operations Team was investigating more efficient ways to manage the Council’s irrigation systems. One idea that surfaced high on the list was integrating a central control system.

“Available water had to be distributed across 24 council sites and 11 schools, so it was important to find a central control system that was able to properly manage flow under peak load scenarios,” said Frank Lepore, Project Manager for Waterproofing Playford, who managed the ASR development and implementation. “Through design and modeling, we knew we needed a significant pipe to feed all irrigation sites under a peak load scenario. The cost of a pipe that size would have blown the project budget. By implementing irrigation scheduling we were able to use smaller pipe, and through flow optimization we were able to achieve the required flows and pressures to the proposed customer base,” says Lepore.

Lisa Cavanagh, Irrigation Service Coordinator City Operations, added: “With the help of Don Cameron from Hydroplan, and our extensive research, we decided to opt for the Toro Sentinel Central Control system. It is the only central control system that can properly optimise flow across several sites from different water sources. Its ability to physically manage the flows to each customer site is fantastic. Since we are dealing with 60 different sites across the Council, this control is crucial. Sentinel makes it easier to manage everything.”

McLeod: ”Before we would check all of our ovals and reserves on a weekly basis. If any issues were to arise, you usually wouldn’t know about it until someone checked the site. Now, I only have to look at my laptop or iPad and the system will tell me straight away if there is an issue anywhere. If a sprinkler gets damaged and water is flowing out, or a pipe has burst somewhere, I will know about it in real time. A great feature of the Sentinel system is also that it can keep all the other irrigation sites going whilst we are fixing one. It doesn’t shut the whole system down. We now have much greater flexibility and robustness.“

McLeod: “The summer of 2014/2015 has been the first full season of using the Sentinel system. The Council is now more capable than ever before and is in the process of building a history of monthly readings and graphing, which will help us to accurately track water savings.”

McLeod also mentioned that having Toro NSN support has been great for backup. With NSN, customers have a dedicated and accessible resource for central control system troubleshooting, problem solving, system operational assistance, and extended warranty on their Toro computer and central components. If needed, NSN’s 24-hour emergency support service ensures minimal disruption to the operation of the irrigation system.

Another benefit of the Waterproofing Playford project and irrigation upgrade is that the Council can more effectively manage an increase in the number of reserves and parks in the city, and the quality of the turf has vastly improved. The City of Playford has also attracted a well-known sporting club to the northern area, as the Adelaide United Football Club setup their training base in the City last year. Moreover, Central Districts Football Club and many other local clubs are all profiting from the improved water availability too. This, in turn, is positively influencing a feeling of well-being and pride in the community.

“The City of Playford is committed to providing a sustainable future for the community, and technology advances in ground- breaking irrigation benefits the community through the enjoyment of open green spaces,” Mayor Docherty said.